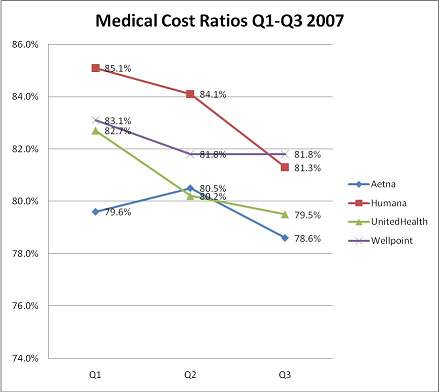 Insuers’ profit margin comes not only from increasing premiums, but by lowering the amount spent on healthcare.  As insurers spend less, their Medical Cost Ratios (MCR) decline. The definition of MCR is simply the amount of money brought in by premiums minus the amount of money spent on reimbursing health care providers.

Insurers reduce what they spend by controlling costs in a number of ways. In its finest form, cost-cutting comes about through efficient operations, negotiating better contracts with such high volume service management companies as labs and diagnostics, and actively promoting well care programs to achieve healthier members.  Some of this happens, of course, but there is a growing trend across the board to simply cut reimbursement rates to providers and erode reimbursement through policy and procedure changes. I believe that this is having the biggest impact on the ever-growing profits of publicly traded MCOs this year.

Note – Each incremental percentage point decrease in MCR is worth millions of dollars in savings to these insurers.

Sadly, these ‘savings’ are not being passed along to employers and individuals in the form of lower premiums.  Instead, premuims are projected to rise by 7.5% in 2008.