With the rapid expansion of telehealth services nationally, CMS is continuing to broaden the ability of practitioners to perform alternative visits and have these visits recognized and reimbursed.

Effective January 1, 2017, CMS will recognize a new Place of Service Code: P02- Telehealth. The descriptor for this code is: The location where health services and health related services are provided or received, through telecommunication technology.

Medicare Practitioners who may bill for covered telehealth services include Physicians, Nurse Practitioners, and Physician Assistants, among other clinicians and are subject to state law. The Center for Connected Health Policy: The National Telehealth Policy Resource Center is a non-profit organization that has a repository of state telehealth policies located on their website at: http://www.cchpca.org/. Practitioners may find it helpful to review their state laws when deciding to implement telehealth services into their patient care.

As of January 1, 2015 the Centers for Medicare and Medicaid Services (CMS) established four new Healthcare Common Procedure Coding System (HCPCS) modifiers to define subsets of the -59 modifier. The Modifier -59, which is used to designate a “distinct procedural service”, is the most widely used HCPCS modifier. It is defined for use in a wide variety of circumstances and is often applied incorrectly to bypass National Correct Coding Initiative (NCCI) edits. In addition, this modifier is associated with considerable misuse and high levels of manual audit activity, leading to reviews, appeals, and even civil fraud and abuse cases. The introduction of subset modifiers is designed to reduce improper use of Modifier -59 and help to improve claims processing for providers. The new modifiers (referred to collectively as -X{EPSU} modifiers) are:

CMS will continue to recognize modifier -59 but may selectively require a more specific -X{EPSU} modifier for billing certain codes that are at high risk for incorrect billing. When a specific –X modifier describes the circumstances for reporting both codes it should be reported in lieu of modifier -59. For example, a particular NCCI PTP code pair may be identified as payable only with the -XE separate encounter modifier but not the -59 or other -X{EPSU} modifiers. The -X {EPSU} modifiers are more selective versions of modifier -59, so it would be incorrect to include both modifiers on the same line. As a default, at this time CMS will initially accept either a -59 modifier or a more selective – X{EPSU} modifier as correct coding, although the rapid migration of providers to the more selective modifiers is encouraged. For further instructions and implementation of the HCPCS Modifiers -X{EPSU}, check with your Medicare Administrative Contractors (MACs) or Private Payers.

Effective January 1, 2015, the 96110 code was revised to distinguish it from a new brief emotional/behavioral assessment code 96127. The revision of 906110 clarifies it as an assessment that is focused on identification of childhood and adolescent developmental levels (e.g., fine and gross motor skills, cognitive level, receptive/expressive and pragmatic language abilities, neuropsychological areas [attention, memory, executive functions] and social interaction abilities), rather than behavioral or emotional status, utilizing a standardized instrument.

The new 96127 code is used for brief emotional/behavioral assessment with scoring and documentation using a standardized instrument. This assessment serves as a mechanism to identify emotional and behavioral conditions that previously may have been underestimated and/or undetected in any age population, such as depression screening and attention-deficit/hyperactivity disorder rating scales. This new code was added to differentiate those instruments that look solely or mainly at behavioral and/or emotional issues from developmental screening which are reported with 96110.

A listing of brief emotional/behavioral assessment and developmental screening instruments with their appropriate CPT code is listed in the grid below. 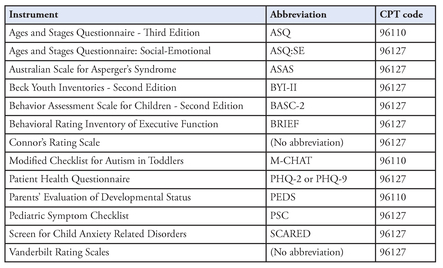