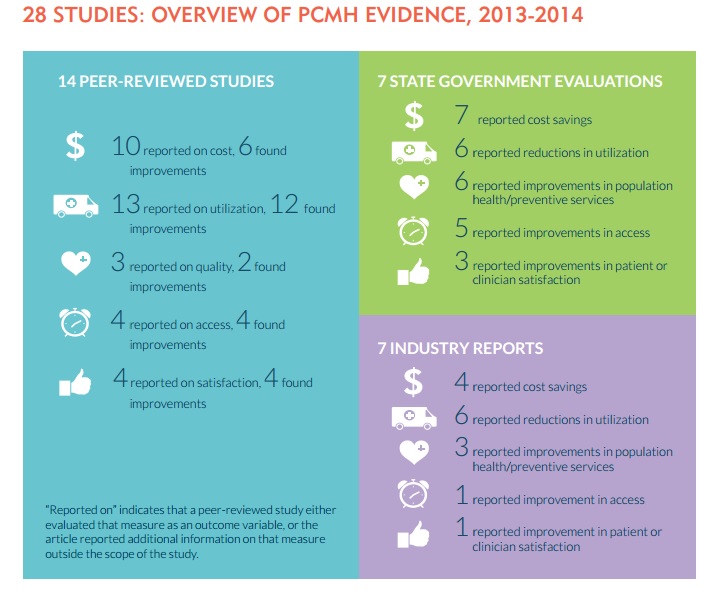 The report concludes key areas integral to the future development of enhanced primary care and the PCMH including: integration into medical neighborhoods and accountable care organizations; financial support for primary care; consumer and public engagement; development of team-based health professions; and the role of technology in the PCMH and primary care.

We work with each client individually to determine where your practice stands today and identify the work to be done to help you meet your goals. We’ll put a project plan in place, keep you on track, and get you to the finish line.

Single site or multiple sites, primary care or multi-specialty, we help you to navigate the process from application through submission. For more information visit: www.theverdengroup.com/our-services/patient-centered-solutions-services/

The other day I read a RWJF report entitled “High and rising health care costs: Demystifying U.S. health care spending” over at http://www.healthpopuli.com/ after a fellow listserve member directed our attention to it. The report basically points out that rising malpractice rates aren’t one of the primary reasons for the increase in healthcare costs in the US, a seemingly popular belief. Instead it’s “…prices, inefficiency, and insurance administration.”  Finally we are getting somewhere close to pinpoining the real drivers, I thought. Then I read the report.

There is very good analysis in here, but it is disappointing to note that while they were identified, administrative costs were not more intensively examined. The authors do state that much of the differences we see between the US and OECD countries comes down to the lack of a universal delivery system, creating a costly fragmented system here. But the level of detail in the analysis seems to stop there.

For example, when comparing physician compensation, the findings state that in the US it is 6.6 times per capita GDP for specialists and 4.2 times for primary care, compared to 4 and 3.2, respectively. However, the authors don’t take that next step to note that in countries where there is universal care, physicians are (for the most part) salaried employees in some form or another. By contrast, the majority of physicians in the US own their own medical businesses, meaning that they are bearing the overhead and expense incurred in doing so. An analysis that factors that in would be more helpful than simply pointing at hard numbers. Without backing out those costs, we cannot know if physician compensation (I am defining compensation as the amount that physicians get to keep) is actually much higher than in OECD countries. Perhaps the authors are looking only at take-home pay, but that isn’t indicated [that said, I just looked up the McKinsey report upon which this is based, and McKinsey IS looking at TOTAL compensation, NOT take home pay – so I rest my case on that point]

The paper goes on to note that ‘MGI (McKinsey) estimated that the United States spends six times more for administration than OECD countries, not including the costs borne by providers in interacting with payers’. Why aren’t those costs included? If they were , the numbers would be much higher and help reveal that the cost of supporting the current private payer system is exorbitant. The authors get close to this idea in Table 1, Drivers of Cost Trend, where ‘changes in third party payment’ and ‘administrative costs’ are identified – when combined these two items account for 23%-26%, and that is without taking in to consideration ‘the costs borne by providers in interacting with payers’. What would the number be if those costs were included? In a study released by Ingenix recently, they state that ‘claims processing inefficiencies impose significant administrative costs on payers and providers, with estimates ranging from $210 billion to $250 billion annually’. Let’s say that again – $210-$250 BILLION, ANNUALLY! They further estimate that 14% of physician revenue is spent on claims activity; 12-24% of health plan revenue is spent on same. So why are the authors NOT including ‘the costs borne by providers in interacting with payers’ in either physician compensation or administrative spending?

Things get really fuzzy when the authors adopt the position of only looking at cost drivers from the perspective of analyzing what actually drives changes in the spending trend. In doing so, they arrive at conclusions such as ’standard assumptions about how a change in health insurance affects an individual’s spending on health care lead to a conclusion that health insurance is not a dominant driver of spending trends’. However counter-intuitive this might seem then, utilization is not a key cost driver; as this study examines, it is the cost per unit of utilization that best represents overall costs, and that per unit cost is composed of the key drivers identified in this study. But once the authors have made that claim, it shifts their commentary from being about end costs of delivery (the numbers initially referenced in the study) to shifting to utilization when it comes to discussing insurance. Therefore they fail to examine the end cost of securing that insurance, which ultimately is THE cost that needs to be examined because that cost includes the profit margins made by insurers, and the associated administrative costs to secure those profits in the process.

It would appear that by missing this point, the conclusions arrived at based on the numbers used are therefore somewhat skewed. That is, the authors are looking at such universal numbers as physician compensation as a percentage of GDP but without applying the cost associated in being a physician in the US system (a very different cost structure than in OECD countries); they are not looking at the cost of premiums as compared to what percentage of those premiums are actually SPENT on care delivery; and they are not examining the cost associated the fragmentation involved in the different middlemen associated with payment delivery. Notably, the section on managed care begins by stating ‘because of data limitations, most of the literature defined managed care as health maintenance organizations (HMOs), entities that play a much smaller role in health care financing today’ – so there is the realization that even the quantification of these entities is difficult,
and due to the identification and research on only perhaps one type of insurer it raises methodological concerns about the research itself. Perhaps because of the lack of comprehensive data on private insurance, the authors choose to make the following closing argument for improving efficiency – ‘payment mechanisms potentially more consistent with efficiency include a single per episode payment that goes to all providers involved in a major acute procedure and capitation payments to a medical practice for the management of patients’ chronic diseases’ – with no consideration about HOW such a single payment would be administered across multiple providers of care. To me, this simply sounds like another level of payment administration being added to the fragmented mix, and a costly one for providers at that.

Finally, at the end of the paper the authors address administrative costs. And yet, they do not scratch the surface here other than to simply note ‘a multipayer system can be made more efficient’ and suggest that more ‘administrative controls’ such as prior authorizations are being ‘re-introduced’ as a way to help with restraining spending. This leads me to believe that the authors have limited experience in the processes involved in administration and revenue cycle management. The opportunity to improve efficiencies in payer-provider interactions there is considerable; adding prior authorizations to procedures drives up physician costs, rather than simply limiting utilization is a way that is significant enough to minimize utilization. The argument cannot continue to be that insurers administrative burdens are a necessary cost in order to keep utilization down. Certainly these administrative burden HAVE resulted in less SPENDING by the insurers, but how much is based on decreasing utilization and how much is due to lack of payment by insurers for services rendered in the event that the rules are not adhered to is open to debate. Therefore, this does not translate to supporting administrative burden as a necessary cost.

To conclude, the authors state under ‘the need for additional information’ that their ‘understanding of high and rising costs is fairly solid. . . yet go on to say ‘paying multiple providers for acute episodes of care requires advances in patient classification and risk adjustment. Paying for medical homes similarly needs better risk-adjustment models and the gathering of data on resources that go into care coordination. To put it differently, existing research has given us a satisfactory understanding of the problem. Now the energies of researchers should be directed toward developing and implementing solutions’. I’m all for directing energies toward implementing solutions. However, I challenge that while the authors may have a reasonable understanding regarding spending, they have not adequately understood the single biggest COST driver of all: health care insurance companies. Until researchers adequately explore just how much cost is involved in allowing these organizations (that have an inherent conflict-of-interest) to set policies on payment, utilization, and provider cost burdens, we cannot move toward meaningful reform in that area. I back up this comment by pointing out that most insurers do not pay for nutritional counseling at the primary care level, do not pay for smoking cessation counseling, do not pay for pediatric counseling and developmental screenings – all of the things that may help to reduce illness in society (and therefore reduce costs). So how can the other lofty goals of improving health and wellness, focusing in on best practices, development of better guidelines, etc and so on, be implemented in a system where insurers have effectively killed primary care and preventive medicine?

I therefore call on the authors to re-examine their ‘fairly solid’ ‘understanding’ of high and rising costs. They, and other researchers, must take a much closer look at how insurers’ policy decisions have impacted the ability of providers of care to actually provide the lowest-cost, best-outcome focused care. With that level of scrutiny, comprehension about the impact of those policies can finally be assessed and the impact of private insurers on COST can accurately be quantified and thus called upon to improve.